HomeMap is a navigation application that allows you to easily place annotations on a map, edit them, add a picture from your photo library or even from the built-in camera of your device.

You can add as many annotations as you want and even import contacts* from your phone ! 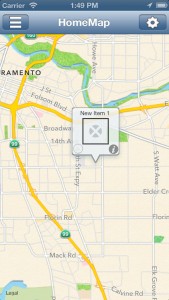 Perform a long press on the map to add a new annotation. 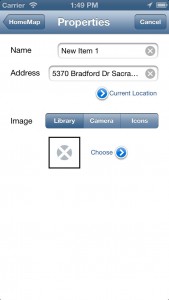 By pressing the info button, you can change annotation’s name, address and picture. Picture can be taken from the predefined icons, your photo library or even the built-in camera in your device ! 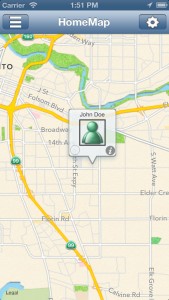 Annotation with a predefined icon.

The list in the back allows you to center rapidly on a particular annotation, change its informations or toggle its visibility.
Need driving route between two annotations ? Simply perform a long press on an element of the list, then drag onto the wanted destination and the Maps application opens with the wanted route !

Want to do the same on the map ? Drag from the bottom left anchor of an annotation upto the destination annotation and again, Maps application opens with the predefined route ! Getting driving directions between two points has never been so easy ! 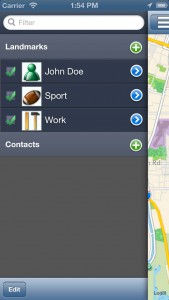 The backlist contains all your annotations. Tap on an annotation to center the map on it. Uncheck it to toggle its visibility. You can too insert annotations from your device contacts list by pressing the + button. 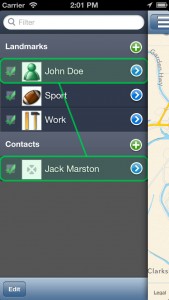 Stay pressed on an element of the list and drag to another : the Maps application opens with directions between the two points ! 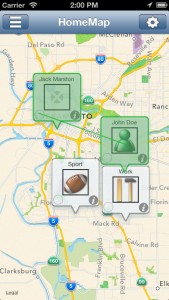 Draw a line from the bottom left anchor of an annotation to another : the Maps application opens with the directions between the two points !

(*Note that only contacts with postal address can be imported)

– filter annotations by name
– annotations become semi-transparent after a few seconds without interaction (transparency value can be changed in the settings)
– display current location
– search for addresses
– choose a picture from your photo library with possibility of cropping
– transport mode : driving or walking
– choose between standard map, satellite or both
– heading direction with autorotation of the map

(NB : the Lite version is free but have a maximum of 3 annotations at the same time and cannot import the contacts from your device)